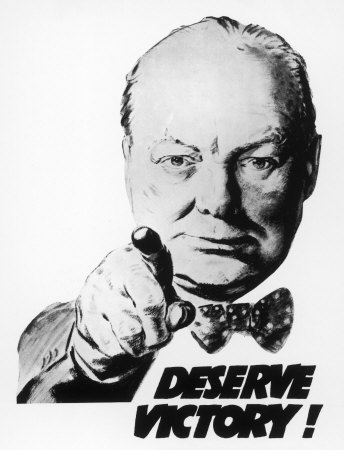 Does your blog, website or Internet Business really deserve to succeed? Well it depends on what you do with it–now doesn't it?

Several years ago, a former boss of mine had a poster of Winston Churchill hanging on his door. It depicted Mr. Churchill pointing to you saying “Deserve Victory!” — underneath it, there was a large piece of paper that someone had taped that interpreted the meaning of the poster — it read:

Was that really true? Did our company deserve victory?

Well, unfortunately in the case of this former employer, the answer was a resounding no — the company itself had a badly flawed business model to begin with, didn't have high enough margins and wasn't listening to its audience–yet the perception among most of the employees was that the company still deserved victory.

Well, about 6 months after the poster went up the company failed — the market had spoken — the company was undeserving of victory.

My boss had it all wrong–in this poster, I'm pretty sure that Winston Churchill wasn't saying “everyone deserves victory (even if you're stupid, lazy and/or have no idea what you're doing on a day to day basis to grow your business).”

This poster is actually all about accountability — it's about Winston Churchill staring you down, telling you that “You need to do everything in your power to be deserving of victory!”

I think it was a brilliant marketing piece and must have been successful–it pushed the responsibility of winning the war to every individual citizen.

Who Decides If You Really Deserve to Succeed?

Of course, ultimately, only your market will determine whether you Deserve Victory or not.

So How Do You Become Deserving of Victory?

In order to be successful in Internet Business, you must live consistently live by a code. Here are the 4 fundamentals of what you'll need to do to be deserving of victory:

So, print that poster of Winston Churchill out, hang it on your wall and look at it every morning before you go into battle. Let him remind you that if you fail — you only have yourself to blame. If you get motivated to create value for your audience by listening to their needs then who knows, your market might just deem you victorious!